Skip to content
HomeInspirationThe world is your oyster, find your place in it – Viji Venkatesh 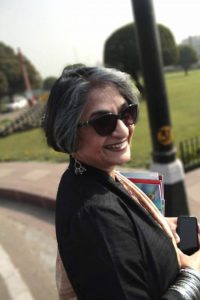 Like all young girls who grew up in the 60s I think I too wanted to become an air-hostess. There was such an aura of glamour around those very words and visions of flying the skies in a saree was very exciting. Then at some time I wanted to become a doctor, a newsreader, an IAS officer and later on even advertising. Of course, growing up in a very traditional Iyer household put paid to some of these aspirations and somehow, I never really pushed for a career that may have maybe just received a nod of approval from the parents. Like the doctor / IAS – one.

I completed my Bachelor’s degree and must confess felt no urge to continue and go in for a Master’s. I was happy to continue with my music classes and took up a job in a neighbourhood school which was a respectable option.

A degree in English literature and nursery school teacher, I guess, looked good as an accompanying note to the horoscope of a good, Tamil, Iyer girl. I wasn’t complaining and in due course, a matching horoscope of a good Tamil Iyer boy found its way into my parents delighted and maybe even relieved hands and I was married off.

I loved the direction my life took. Married to a fine young man and mistress of a very smart little apartment in the housing colony of the refinery he worked in, I was every inch my mother’s daughter and took great pride in keeping a nice home. It was a welcome challenge to do so with just enough resources to make it fun but not a chore. I had grown up seeing my mother create such a happy and beautiful home for us with just basic necessities. Never had she allowed any kind of want (and there were quite a few of those) to come in the way of making sure we five children, and our father and our grandparents, and the assortment of young aunts and uncles and older cousins who were a permanent feature of our household, had all we wanted to make life feel good. I began my family life with the perfect blueprint that was my mother’s legacy. A happy and diligent home maker and when the children came along, a devoted mother too. My home was my world. Books and music, the inherited love interests from my family were my support systems.

House proud and home bound – that was me; even when we followed my husband for a few years to Venezuela and then to the U.S.

Waxing and polishing the floors, making sure every door knob and artifact in the house was ‘Brasso-ed’ to perfection, sewing curtains and casual clothes for the guys in my life, making all kinds of possible pickles and sweat meats and celebrating festivals and what have you.

Housewife, homemaker, a mother. Working all day, but not a working woman.

Today, when I look back at those days, I realise they were full and fulfilling days.

And then I became “the” working woman. Circumstances decreed that I find some work that would help me help my husband shoulder some of the responsibilities of the household as we found ourselves in a rather challenging situation. Our sojourn in Venezuela ended when the economy collapsed there and saw us lose quite a bit of our savings. And back home things were not very welcoming either. A dear friend urged me to teach my young sons to make a sandwich for themselves when they came home from school and leave me free to go out and find a job.

It was 1987 and I was 35 years old. I had no qualifications. No job experience except some baby sitting and selling Avon Cosmetics in the U.S.  I thought back to my teaching days before I was married and in all innocence applied for a job at the local school. I was in for a rude shock. They wanted a B.Ed degree. So, I applied for admission into the B.Ed programme only to find they needed teaching experience. My pre-marriage job did not qualify.

For the first time in my life I began to rue the fact that I had not attempted to study further; I had not pursued a Master’s nor had acquired any super speciality skills.

I remembered with some regret those fleeting ambitions I had once nurtured. It was, I think, one of the most difficult times in my life. But I did not have the luxury of too many options and had to be out there doing my bit. It became some kind of an inner demon I had to deal with. I knew I had it in me and I needed to show it to myself more than to the world or anyone around me.

I must also share that it had been a difficult period post our return and thanks to the usual family and “in-laws” shenanigans, quite a bit of my confidence in myself had been eroded. So that was impetus enough.

Today when I look back at the three decades over which I have built my career in cancer care, I realise there is a bit of everything in it…all the career options I had once dreamt about. I travel extensively and yes, in my saree; I talk on radio and other audio visual media often, I could not get closer to the field of medicine than I am now and yes, I work very hard at promoting my cause and enjoy finding the best copy to promote and brand my outfit. My administration skills have been honed to perfection and I can hold my own in any corporate environment. I conduct various training and therapy workshops all over the world, I run a full-fledged office in the Mecca of business in India, Mumbai, and find tremendous satisfaction in what I do.

To be honest, I did not choose cancer as my field. Cancer chose me. Like I said, with my limited skills and experience and talent, there really was no luxury of choice. I had to accept what was offered – a tough and taxing assignment raising funds for a cancer non-profit. And once I took the plunge, believe me, there was no looking back. Like I said I had to prove myself. To myself. And in the founder of that non-profit I found a great mentor and a teacher. His greatest gift to me was that he created a job for me around what he saw in me.

So, I got myself a monthly local train pass and did the Vashi to VT commute every day. Mind you this was 30 years ago, when there was no train or BEST service from the new, developing New Bombay. I was totally dependent upon the State Transport bus service, and the Harbour line local railway service. If you are Bombay bred, you know what that means.

But I was determined to make this work. I realised and recognised a certain hunger in me that pushed me to find a place for myself in the arena that had opened out in front of me. I climbed up countless stairs and knocked on many doors in all those cold and unfriendly high rises in the richest of cities to ask for money for cancer patients. You don’t know how difficult it is to ask for money till you go out there and do so. And yes, even selling Avon cosmetics to American housewives was easier. I went to mills and factories to talk to the workers and their union leaders about the hazards of tobacco chewing. I discovered I had public speaking skills. I found out my Delhi Hindi made me stand apart and people heard me. I found out it was worth braving the fisherwomen loaded, wet baskets in the trains in my starched cotton sprees as it gave me style and dignity. Tools I used to convince Labour Officers and CEOs alike to take me seriously.

I brought home all the books on cancer I found in the British Council library. I haunted the corridors of Tata Hospital and when I was deputed to help set up their Preventive Oncology Department I knew I had arrived at an important turning point in my, yes, I say it boldly, my career. Tata Hospital, the seat of ultimate learning in cancer care also brought me into the orbit of palliative care.

And then came some testing times in that career. Maybe it was burn out. Perhaps, after 15 years I had reached a plateau with no more peaks to scale. I moved on. And away from cancer. To my passion, books. I became Store Manager of one of the iconic bookstores in Bombay. I began learning all over again. At 50 years of age. I learnt about retail and running a tight ship, I learnt back-office work, I faced a computer and understood what “reconciliation” was all about. All I had when I took up that job was what you would call – product knowledge. I was an avid reader. I loved going to the store every day and meeting my readers and selling them books. Recommending the best, making them best sellers, reading to the children, welcoming the authors. I was hiding from cancer and some of the hurt it had brought me.

Then I moved on again, and took up an offer to work with a dear journalist friend who needed someone to help him with a show he was presenting on Doordarshan.

I did everything possible…from interviewing guests on the show to voice overs to editing to what have you. What an experience that was. More honing of skills. And then cancer called me again. And I could not refuse. And I began all over again. Set up an office, peopled it with the best, trained them and we were ready to offer the best to thousands of patients who were our responsibility.

Today, another fifteen years on, at 65, I am still learning. Support groups and patient workshops, setting up a Trust, working with the Government departments to obtain tax benefits; it is never ending – and so rewarding.

Never lose the desire to learn. Do not be afraid of what lies ahead. Never stop being hungry for more.  I guess this mantra has kept me going.