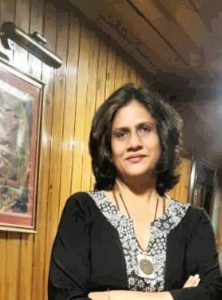 Radha Roy Biswas is a public policy researcher by training, specializing in higher education, workforce skills and regional development studies. After acquiring her Master’s Degree in Economic Development studies from the University of Massachusetts, she worked at think tanks in Boston, USA, and has a range of published academic papers and reports to her credit.

After nearly 15 years in the USA, she returned to India with her family a few years ago. Though she continues to consult in her field, she is devoting some time to teaching and training to enhance communication skills in children and youth, and periodically conducts a variety of creative workshops for students and teachers. She has a keen interest in reading, creative writing, and putting up performances with children, and has published poems and essays.

“English”, as the incomparable Amitabh Bachchan said in Namak Halal, “is a very funny language!”.

Is it? One may argue that it is the opposite, an unfunny language, notoriously hard to learn, if you have not been brought up, in and around it.  Take just one aspect, pronunciation. Think of the lack of simple phonetic predictability, the illogical differences in ‘go’ and ‘do’, ‘but’ and put’, ‘book’ and ‘door’, and ‘chair’ and ‘chemistry’. Or, if you prefer, consider the abundance of words with multiple meanings. Ordinary words, a novice English learner thinks he or she knows, but which suddenly spring up in unexpected places with completely different meanings; a world, where rear could mean to raise, or to be at the back; where a toe can refer to a body part, or it could mean to follow; and mean, could indicate the generality of things, or someone decidedly nasty!

So, what’s a student to do with English, a maddening mishmash of influences, an ever-changing language, where there are as many exceptions, as there are rules? The twists and turns of English make it almost impossible to navigate simply by going through the grammar books, even with good instruction. It is a language learned through assimilation — by reading, listening and speaking; through practice, practice, practice. Quite a torture, then, for the average student, graduate, or aspiring professional English learner, when there are so many competing pressures and priorities.

And so, we may ask, why do we have to keep learning it?  After all, it has been nearly 70 years since the people who foisted this on us, left, and the British Empire no longer dominates the world. By now, we should have outgrown it and moved on.

Here is a fact. The British don’t rule the world any more, but English still does. It is the official language in more than 75 countries. Nearly 2 billion people speak it on a regular basis, making it one of the most popular languages in the world.  It is the de facto language of international business, the international medium of cultural exchange — the majority of the world’s top films, music and books are produced in English. Most importantly, it is the lingua franca of science and technology. All programming languages for computers are in English, and at the user end, about half of the content produced on the internet is in English. Leading global tech organizations that originate in non-English speaking nations use English as their main language of communication. Not just business organizations, most governments and premier educational institutions in various non-English speaking nations use English as the main language of communication.

So, in some ways, the British conferred an uncommon advantage on us, by bequeathing this language, never mind their motives or objectives.

It is necessary, because without it, we have no common language for business or regular communication. And it has certainly been an advantage for Indians venturing abroad to study or work. India’s IT revolution happened, not in small part, because of Indians’ facility with English. If good technical skills were half the story in the creation of India’s high-tech workforce through the 1990s and 2000’s, then the other half, surely, was the ability of Indian engineers and techies to communicate well in English. This facility with English is also what drove the creation of one of India’s most successful industries in recent times — the BPO sector.

The global relevance of English, today, is indisputable. It is the language of opportunity and advantage; a basic skill needed to navigate a globalized world. And that’s why more people are learning it than ever before. Mexicans, Brazilians, Filipinos, the Chinese, and even Europeans, are making unprecedented investments in learning English, and in teaching it to their youth. For young Indians, this means that the advantages that the previous generations enjoyed, are going to erode fast, they will face competition from all corners of the world.

And yet, two negative developments are taking place.

The standards of English in India are slipping. I am not speaking about our home-grown patois, the happy mash up of English and Indian languages, Hindi, mainly. Our Hinglish — with gherao-ed (surrounded, closed-in), and chipko-fy (to stick), marks our own stamp on English.

It is the falling levels of formal English that is the problem; the poor grammar, the incorrect syntax, the appalling inability of students who have gone through years of English instruction, to string together a paragraph in English, without slipping into Hindi or another language. This is in spite of English being taught widely at all levels in the nation’s schools. There are many reasons for this, the details of which are beyond the scope of this article. But among the main offenders: Poor and undifferentiated instruction, even though there is tremendous variation in basic English preparation among students in schools and colleges;  the lack of remedial English programs in schools, especially for those who come to it as a second language with little or no help for learning it at home; indifferent to poor quality of English preparation among English teachers themselves, and the general decline in reading — the last, a requisite for learning any language.

The second problem is occurring in English medium schools. There is a growing tendency to dismiss English as being unnecessary, where it is ostensibly the required medium of communication between students and teachers, and among students themselves.  There is a popular notion, especially among teenagers, that “English, Vinglish” is unimportant, and speaking it is an imposition which can be ignored or defied.  There is even that tendency to run down those who do try to speak it, “Angrez chaley gaye aur inko chorh gaye…”. As a result, one can hardly hear English outside of a teacher-student classroom exchange. English is being studied only for the purposes of being regurgitated in exam papers, only though the books and for the books, which, as any fluent English speaker knows, is definitely not the way to go about it.

Unfortunately, it all comes to a head, when these students go through college where the deficit only gets worse, when the focus turns fully to chosen areas of study, and English takes a backseat. This deficit grows even further, when college graduates go out in the world of work, and discover that the English they have learned is simply not enough; when they run into roadblocks in interviews or group discussions, and miss out on opportunities. It is no secret that no matter what industry you work in, a command over English can command a higher salary, even a premium in the job market for a new worker, and is definitely a key to career mobility.

Yet, a national employability survey, Aspiring Minds from PWC, shows worryingly poor levels of employability of Indian graduates, partly attributable to poor English Skills. By one estimate, only 11 percent of Engineering graduates find employment in knowledge intensive sectors, and the lack of adequate English skills plays a major part. Also, poor English training for faculty, according to the British Council, is a major factor. There simply aren’t enough well trained and qualified English teachers, and less so in small cities and towns.

Luckily, new educational technologies like online courses, flipped classrooms, and multi-media remote instruction are there to help.  A student in Patiala or Jhargram can participate in courses being offered from Mumbai or Bengaluru or Calcutta, or even abroad. Students in suburban areas no longer have to travel into the city to get quality instruction. Online technologies also make flexible scheduling possible for time strapped students and professionals to bone up their English, and yes, sometimes, that’s all that is needed — a refresher.

The key to opening up a world of English is just a click away. But all this can be leveraged, if, and only if, students recognize the inherent value of being fluent in English and the advantages it confers, and when they are willing to step up, to practice listening, reading, writing and speaking it. Only then can they hope to make the remainder of Big B’s famous claim true, and not just learn English, but, “talk English” and “walk English”!